I wonder how a man this smart could find himself in this position.

Or maybe this man is just a great salesman. Maybe he isn’t even that “smart.”

Maybe he’s simply sold visions of grandeur and everyone bought it –to the tune of $50 billion. That’s the market cap of Tesla right now. That’s why this story matters. We’re talking about some of the biggest funds in the world and investors throwing their money at Musk.

Most of you know me from Twitter. Young FinTwit is in the house! Born and raised on the Internet. I’ve seen some really strange things in my time here. I once calculated the number of hours I’ve spent online talking about the stock market with others. Most of whom I’ve never met.

I hope I’ve made some of you laugh. I hope I’ve helped others learn something new. I hope I can now show you my thoughts about the one thing everyone can’t stop talking about: Elon Musk.

Sometimes the most straight forward is indeed the most straight forward. When John F. Kennedy was assassinated, people were fascinated by a man with a black umbrella. It was about 70 degrees out that day. The sun was shining. People were waving, clapping, and letting the fresh air surround their special moment with our President of the red, white, and blue. But why would one man have an umbrella? This man must be a conspirator! This man must be the one who commits the ultimate atrocity!

In reality, it was just a man with an umbrella. Everyone from your uncle Morty to the entire FBI have investigated this man. It had rained earlier that morning, and now the sun was in his face. This man just needed an umbrella.

But often times, it is!

Think of all the times you lost track of your keys or even your phone. You found yourself looking everywhere. Yet the entire time, it was right there. Right in front of you and yet you ignored it. Wtf.

People everywhere are searching to find reasons of Elon Musk being a surprise guest in One Flew Over The Cuckoos Nest. Even more are searching for him to be a fraud. All of the smartest people I know are digging for evidence. Most are saying Tesla is doomed.

But still, here I am. I think of William Wallace. I imagine a lot of investors who are long Tesla and believe in the story will relate to Wallace screaming “Hold!” and “Holllllld!” before battle. I can’t even imagine being long Tesla AND crypto at the same time. HODL!

I actually wrote about Musk once and how he’s using Twitter. I talked about controlling your narrative by using social media. Why go to the papers or the reporters when you can simply publish your thoughts live for everyone using a medium you control. Welcome to 2018.

I think of Musk using social media to wield his narrative, his voice, and his opinion. This free flowing technology is open to the world and at only the cost of an internet connection. Some say it won an election in 2016. Some say Trump would have never won if it weren’t for the unique ways he controlled his message across all social platforms. Especially Twitter.

Musk, I believe, is trying to do the same. Today, his story is told and talked about across the country. Literally millions of people across our marble have mentioned “Musk” or “Tesla” or “Elon” in the last few weeks.

I don’t think any other CEO in history has accomplished such a fascinating thing. If I’m Elon Musk’s marketing team, in terms of sheer exposure and people talking about him… wow. Imagine being that team in a corporate meeting when someone asks, “how many people have we reached?”

Which reminds me: we’re talking about a man who invented a new type of rocket. A man who’s changed the way everyone thinks about electric vehicles.

EVERY car company is pouring money into R&D right now to try and catch Musk. Literally every car company. I am reminded of the old saying, “there’s no such thing as bad publicity.”

My friend tells me, “welcome to Mr. Musk’s wild ride.” So I find myself leaning toward the idea that many of us think we’re “too smart.” Too knowledgeable about things we actually don’t understand. Too surrounded in group think and echo chambers. Suddenly, we all know, “Musk has lost it.” We all know, “Tesla will collapse.”

Sadly, most thought that way during the 2016 election. 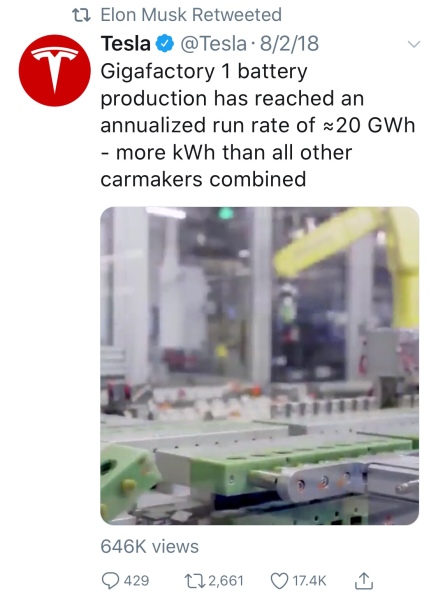 In this quest, I’ve found myself fighting through the depths of Twitter, weeding into Tesla’s financial situation, and engaging in the nonstop drum of debate at dinner and over cold beer with friends. Today, I believe Musk understands more than any of us truly realize. The Chinese tech giant Tencent has a 5% stake. Middle East oil tycoons have a stake. Nearly 50% of all Tesla shares are held by about 13 people or companies.

That’s conviction. I don’t bet against that nor do I act like I know more than that.

Later this month, I will be releasing a report about Musk and Tesla. You will want to read it. In this report I will go into depth about where I stand on Tesla as a company, its valuation, and what that could mean for everyone across the globe.

So put everything down. Press the link above to sign-up.