Let me start by reminding you of an IPO I have been unable to forget. I will show it to you as a chart, a wonderful chart that goes straight down. 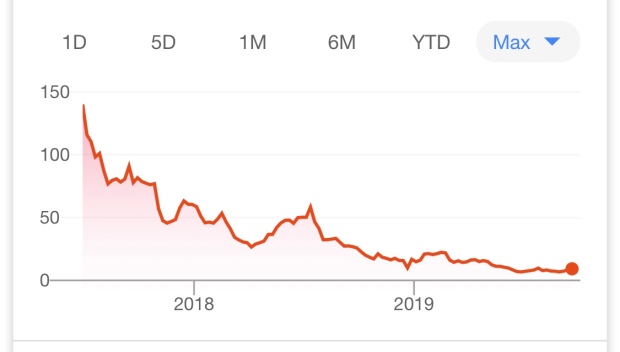 What you see is the great meal delivery company Blue Apron since it went public. The unicorn! The one that would change the way we eat!

I’m not totally sure how it happened, but at one point this idea to deliver meals in a cardboard box using the USPS was a billion dollar company. In 2017, during a strong bull market, Blue Apron went public. If you had bought $200 worth of this then lauded unicorn, you would have about $15 left today. Good enough for a few coffees and two bagels.

So what exactly happened here? How did it go from exciting startup to the depths of today’s Miami Dolphins? While some might say business decisions or leadership or competition, it seems more likely it was just valued really, really wrong in private markets. Oh, and a good PR firm can really make that valuation pop…

Venture Capital is incredibly important to the economy. They fund start-up companies and take immense risk. But it’s important to remember the valuations they seek, or the valuations they decide on, are generally done in a fairly closed setting. Seven people sitting in a room can chose to invest in a company at a valuation of $80 billion and kachinga, this company is now worth $80 billion – call the newspapers and reporters.

In the words of South Park:

The fate of WeWork, to some degree, may be shedding some light on these valuations. Just because some private investor decided to give money to a company at one price does not mean that’s what it’s worth to everyone else with the same information. When WeWork was opened up to public markets for its potential IPO where thousands of people could scrutinize, discuss, and dive deep into it, it fell apart. It wasn’t really worth what private investors told everyone it was worth. There are now more VCs and venture money than ever. The hype and dreams of billions naturally only scales with that. I come back to that scene from the movie The Social Network and how that permeated the startup landscape.

Chamath Palihapitiya, a private investor who made his mark as an early employee at Facebook, but also one who is pretty outspoken, not long ago started talking about problems in the private investing world. He’s worried about the ponzi scheme nature of the existing cycle. I don’t agree or disagree, but I find it interesting and here’s what he writes:

“Over the past decade, a subtle and sophisticated game has emerged between VCs, LPs, founders, and employees. Someone has to pay for the outrageous costs of the growth described above. Will it be VCs? Likely not. They get paid to allocate other people’s (LPs) money, and they are smart enough to transfer the risk. For example, VCs habitually invest in one another’s companies during later rounds, bidding up rounds to valuations that allow for generous markups on their funds’ performance. These markups, and the paper returns that they suggest, allow VCs to raise subsequent, larger funds, and to enjoy the management fees that those funds generate.”

It’s almost as if we’ve taken the “rounds” and accepted them as truth without ever actually getting a clear picture ourselves. If a tree falls in the forest did anyone hear it? If a TechCrunch headline says a company is worth billions do we all believe it?

It’s important to remember that what we see today in private investing is fairly new. Public markets, on the other hand, have been around a long time going back to the Buttonwood Tree. But this cycle of private deals and private rounds of investing is entirely on its own. What I mean is I have yet to meet someone who could show me a historical example of anything like the size or scope of private investing and venture capital like we’re seeing today.

*person walks out of boardroom*

*everyone proceeds to say company is worth $7 billion*

My friend always jokes that his life is a startup and it’s worth hundreds of millions if he could pitch it to the right people.

When Lyft IPO’d, I noticed a chart showing who invested in the company when and where. I was most surprised to see Fidelity and Carl Icahn on the list. These are companies and people known for their careers in public markets. You don’t see those names in venture capital often and when you do, you have to wonder: is it now so easy to make money in venture capital that Carl Icahn can just prance right in and then flip his money for a cool 10x return?

2019 has so far been the year of giant new IPOs being challenged. Uber, Smile Direct Club, Lyft, and more hit all-time lows shortly after their IPO. Lately, a group of VCs have been calling for direct listings. One of the core arguments is that investment bankers, day traders, and speculative investors are taking advantages of these companies on the long and short side when they go public. I can’t help but think this is a call for help. A call for help signaling the public markets aren’t buying their companies like they thought they would. I wonder how many private investors have been injecting money into these mega companies on the basis that, “public markets will take care of it, don’t worry.”

Public markets are ruthless. Any real investor or grizzled trader will show you that. I hang with them all the time and hear stories that no one should go through with their own money.

Going forward, the question will be if something like WeWork’s IPO collapse is an outlier or actually the norm for a wave of abysmally wrong private market valuations. I even wonder if a wave of write downs are coming. If anyone is safe. Especially those who have been marking up their stock behind closed doors on the idea that the arbitrary price they determined will easily be accepted by everyone else.

I have long been a proponent of public equity markets. They are over 100 years old. The Government is heavily invested in regulating them and millions of people have access to them. Generations of people have passed through them and handed down their prized holdings. I am beginning to wonder if, perhaps, public markets are actually the smart money and private markets are the “not-so-smart” money. We will find out over the coming months and it’s possible that this wake up call won’t be friendly to the gurus of today’s private investing landscape.